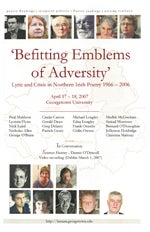 Forty years ago, the publication of Seamus Heaney’s Death of a Naturalist sounded the first notes of a new generation of Irish poets. Shortly thereafter, these notes were challenged in the public sphere by the harsher sounds of sectarian faction. How poetry managed not only to preserve its own domain and dignity in the midst of such turmoil, but did so in a manner that gained the sympathetic attention of a worldwide audience is the topic of the 2007 Lannan Literary Symposium.

Symposium I: Reception Politics
11:00AM– 12:15 PM | Copley Formal Lounge
The history and tendencies of the ways in which Northern Irish poetry has been received within the Anglophone critical establishments. Participants: Frank Ormsby, Bernard O’Donoghue, Cóilín Owens and Jefferson Holdridge (moderator).

At Home in the World: Readings by Gerald Dawe and Bernard O’Donoghue
8:30 – 9:30PM | Copley Formal Lounge

Video Dialogue: Sing Yourself to Where the Singing Comes From
11:00 – 11:30AM | ICC
Seamus Heaney in conversation with Dennis O’Driscoll. Video recording made at Dublin, Ireland, March 1, 2007.

Symposium III: Lyric and Crisis
11:30AM – 1:00PM | ICC
The availability of the lyric mode to the historical moment, and the pressure on the form exerted by that moment. Is there a center that holds? How might it be identified and spoken of? Participants: Ciarán Carson, Michael Longley, Paul Muldoon, Medbh McGuckian, & Patrick Crotty (moderator).

April 18, 2007 | Video Dialogue: Sing Yourself to Where the Singing Comes From

April 18, 2007 | Video Dialogue: Sing Yourself to Where the Singing Comes From & Symposium III: Lyric and Crisis