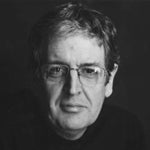 Gerald Dawe was born in Belfast in 1952 and educated at the University of Ulster and at the National University of Ireland, Galway. His six collections of poetry include Sheltering Places (1978), Sunday School (1991), The Morning Train (1999) and Lake Geneva (2003). A recipient of a number of awards, including The Macauley Fellowship in Literature (1984) and the Ledig-Rowohlt International Writers’ Fellowship (1999), he was elected Fellow of Trinity College, Dublin, where he is Director of the Oscar Wilde Centre for Irish Writing, Director of the Graduate Writing Programme, and Lecturer in English. He was editor of the periodical Krino from 1986 to 1996, and held the Burns Chair at Boston College in 2005. A selection of his criticism is forthcoming from Creighton University Press, and Earth Voices Whispering, an anthology of Irish war poetry, is forthcoming from Blackstaff.

A Day in the Life

The light from Maureen’s kitchen
matches the scaffold of moonlight
in ours; rushing clouds spotted
at my window conceal the moon.
*

Over the road our neighbour’s
big, black one-eyed cat waits
at the office door opposite
and is duly admitted.
*

My trousers draped over the bed
look very different this morning,
as if they belong to another man—
my father’s, for instance, or a brother’s.
*

Unbeknownst, I bring a piece of chalk
home, like a fitter in a fabrication shop,
or in the belly of a ship, or like
a tailor who drafts the body’s outline.

Befitting Emblems of Adversity | April 17, 2007
At Home in the World: Readings by Gerald Dawe and Bernard O’Donoghue”