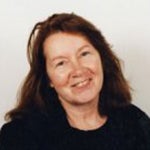 Medbh McGuckian was born in Belfast in 1950 and educated at Queen’s University, Belfast. She received an Eric Gregory Award in 1980 and the Rooney Prize for Irish Literature as well as the Alice Hunt Bartlett Award for The Flower Master (1982). Her other collections of poetry include On Ballycastle Beach (1984), which was awarded the Cheltenham Poetry Prize, Captain Lavender (1994) and Shelmalier (1998). Her Selected Poems 1978-1994 was published in 1997. Her most recent collection is The Currach Requires No Harbours (2006). She has edited the anthology The Big Striped Golfing Umbrella: Poems by Young People from Northern Ireland (1985), and has translated (with Eiléan Ní Chuilleanáin) a selection of poems from the Irish of Nuala Ní Dhomhnaill entitled The Water Horse (1999). Her prose includes Horsepower Pass By! (1999), a study of the car in the poetry of Seamus Heaney.

The Good Wife Taught Her Daughter

Lordship is the same activity
Whether performed by lord or lady.
Or a lord who happens to be a lady,
All the source and all the faults.

A woman steadfast in looking is a callot,
And any woman in the wrong place
Or outside of her proper location
Is, by definition, a foolish woman.

The harlot is talkative and wandering
By the way, not bearing to be quiet,
Not able to abide still at home,
Now abroad, now in the streets,

Now lying in wait near the corners,
Her hair straying out of its wimple.
The collar of her shift and robe
Pressed one upon the other.

She goes to the green to see to her geese,
And trips to wrestling matches and taverns.
The said Margery left her home
In the parish of Bishopshill,

And went to a house, the which
The witness does not remember,
And stayed there from noon
Of that day until the darkness of night.

But a whip made of raw hippopotamus
Hide, trimmed like a corkscrew,
And anon the creature was stabled
In her wits as well as ever she was biforn,

And prayed her husband as so soon
As he came to her that she might have
The keys to her buttery
To take her meat and drink.

He should never have my good will
For to make my sister for to sell
Candle and mustard in Framlyngham,
Or fill her shopping list with crossbows,

Almonds, sugar and cloth.
The captainess, the vowess,
Must use herself to work readily
As other gentilwomen doon,

In the innermost part of her house,
In a great chamber far from the road.
So love your windows as little as you can,
For we be, either of us, weary of other.