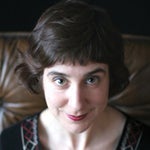 Sinéad Morrissey was born in Portadown, County Armagh, Northern Ireland, in 1972 and grew up in Belfast. She was educated at Trinity College, Dublin. Her collections of poetry are There Was a Fire in Vancouver (1996), Between Here and There (2002) and The State of the Prisons (2005). Her awards include the Patrick Kavanagh Award (1990), the Eric Gregory Award (1996), the Rupert and Eithne Strong Trust Award (2002) and the Michael Hartnett Award for Poetry (2005). In 2002 she was the Poetry International Writer in Residence at the Royal Festival Hall, London, and took part in the Writers’ Train Project in China (2003). She has taught widely in Germany, Japan and New Zealand. She is currently a member of the faculty of the Seamus Heaney Centre for Poetry, Queen’s University, Belfast.

God’s old angels made us peaceful.
They had wings of love and explanation.
They brought us our destiny to lower our eyes
And let everything be for a reason.
There was no bewildering them.

My new angels are howling, hard,
And there are masses in heaven
For every snuffed out light on a back road.
Their rage is assured, ragged, unforgiving.
There is no perfecting them.