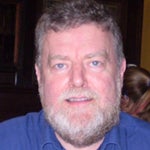 Patrick Crotty was born in Fermoy, County Cork, in 1952 and educated at the National University of Ireland, Cork and at the University of Stirling. He has taught at St. Patrick’s College, Dublin, the University of Ulster, and at Trinity College, Carmarthen, and is Professor of Irish and Scottish Literature at the University of Aberdeen. An authority on the poetry of Hugh MacDiarmid, he has written widely on modern Irish and Scottish literature. His three-volume edition of the Complete Collected Poems of Hugh MacDiarmid is forthcoming, as is his New Penguin Book of Irish Verse. Professor Crotty is the Director of the Yeats International Summer School 2006-2008.