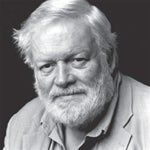 Michael Longley was born in Belfast in 1939 and educated at the Royal Belfast Academical Institution and at Trinity College, Dublin. From 1970 to 1991 he worked for the Arts Council of Northern Ireland as Combined Arts Director. His collections of poetry include No Continuing City: Poems 1963-1968 (1969), Man Lying on a Wall (1976), Gorse Fires (1991), which won the Whitbread Poetry Award, The Weather in Japan (2000), which was awarded the Hawthornden Prize, the T.S. Eliot Award and the Irish Times Poetry Award, and Snow Water (2004). He was awarded the Queen’s Gold Medal for Poetry in 2001. His Collected Poems was published in 2006. He has edited Causeway: The Arts in Ulster (1971), Louis MacNeice: Selected Poems (1988), W.R. Rodgers: Selected Poems (1993) and Twentieth-Century Irish Poems (2002). His prose includes Tuppeny Stung: Autobiographical Chapters (1994). He is a Fellow of the Royal Society of Literature and a member of Aosdána.

The spear-point pierces his tender neck.
His armour clatters as he hits the ground.
Blood soaks his hair, bonny as the Graces’,
Braids held in place by gold and silver bands.
Think of a smallholder who rears a sapling
In a beauty spot a burn burbles through
(You can hear its music close to your home)
Milky blossoms quivering in the breeze.
A spring blizzard blows in from nowhere
And uproots it, laying its branches out.
Thus Euphorbus, the son of Pantheus,
A boy-soldier – the London Scottish, say,
The Inniskillings, the Duke of Wellington’s –
Was killed and despoiled by Menelaus.