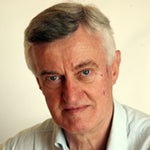 Bernard O’Donoghue was born in Cullen, County Cork, in 1945 and later moved to Manchester, England. He was educated at Oxford University, where he is a Fellow of Wadham College. His collections of poetry include Gunpowder (1995), which received the Whitbread Poetry Prize, Here Nor There (1999) and Outliving (2003). Other works include an edition of the i (1982), an anthology, The Courtly Love Tradition (1984) and a work of criticism, Seamus Heaney and the Language of Poetry (1994). He is a Fellow of the Royal Society of Literature. His most recent book is a translation of Sir Gawain and the Green Knight (2006). Selected Poems is forthcoming.

Unhappy the man that keeps to the home place
and never finds time to escape to the city
where he can listen to the rain on the ceiling,
secure in the knowledge that it’s causing no damage
to roof-thatch or haystack or anything of his.

Unhappy the man that never got up
on a tragic May morning, to go to the station
dressed out for America, where he might have stood
by the Statue of Liberty, or drunk in the light
that floods all the streets that converge on Times Square.

Unhappy the man that has lacked the occasion
to return to the village on a sun-struck May morning,
to shake the hands of the neighbours he’d left
a lifetime ago and tell the world’s wonders,
before settling down by his hearth once again.

Befitting Emblems of Adversity | April 17, 2007
At Home in the World: Readings by Gerald Dawe and Bernard O’Donoghue”