America from the Outside 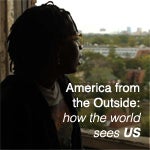 With an eye towards the recent conflicts in countries near and far, the role of America in world politics has come into question more and more frequently. As McLuhan’s vision of a global village becomes a more and more tangible reality, the cultural imperialism of the United States as well as its effects on the village inhabitants must be examined all the more closely.

The 2013 Lannan Spring Symposium and Literary Festival America from the Outside: How the World Sees US will explore and question the perception of the United States and its various cultures both within and without its borders by looking at poetry, photography, film, journalism, and literature that questions what “America” means as a concept, country, and culture.

April 2 | Gaston Hall | 7:00 PM Doors at 6:30 PM
Open to the public. No ticket required.
Introduced and moderated by Andria Wisler, Executive Director at Georgetown University’s Center for Social Justice Research, Teaching and Service. A reception and book-signing will follow in Copley Formal Lounge.

Of Thee, We Write

April 3 | ICC Auditorium | 3:30 PM
A roundtable discussion with all symposium participants. Moderated by Professor Matthew Tinkcom, Associate Dean of Academic Affairs, Graduate Program in Communication, Culture, and Technology, and Associated Faculty with the Department of English

Introduction and discussion led by Barbara Feinman Todd, Journalism director and Co-Director of the Pearl Project. A tribute to Medea Benjamin and Code Pink will open the evening. A reception and book signing will follow in Fisher Colloquium.