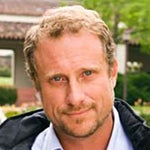 American artist, geographer, and writer Trevor Paglen received his MFA from School of Art Institute of Chicago and a PhD in geography from UC Berkeley, where he also completed his undergraduate work. The recipient of numerous grants and awards from the Smithsonian, the LUMA Foundation, and the Aperture Foundation (among others), Paglen has written books and articles on a myriad of subjects, including experimental geography, visuality, and state secrecy. Paglen’s photography and other visual works have been shown at the 2008 Taipei Biennial, the Tate Modern, and the Metropolitan Museum of Art, as well as a number of other museums and events.