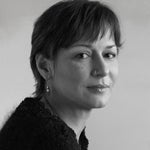 Born in Puerto Rico, Naomi Ayala moved to the United States in her teens, eventually earning an MFA from the Bennington College Writing Seminars. Writing in both Spanish and English, Naomi Ayala is the author of two books of poetry, Wild Animals on the Moon and This Side of Early. Her third book of poems, Calling Home: Praise Songs and Incantations is forthcoming from Bilingual Review Press. Her translation of Argentinean poet Luis Alberto Ambroggio’s most recent book of poetry, The Wind’s Archeology/La arqueología del viento, was published by Vaso Roto Ediciones in Mexico in 2011. Naomi’s most recent work in Spanish appears in Al pie de la Casa Blanca: Poetas hispanos de Washington, DC (North American Academy of the Spanish Language, 2010). Naomi has won several awards; among these are Special Recognition for Community Service from the U.S. Congress, and the Martin Luther King, Jr. Legacy of Environmental Justice Award. Naomi lives in Washington, DC and teaches at The Writer’s Center in Bethesda, MD.

One morning
they dig up the sidewalk and leave.
No sign of the truck,
only the large,
dark shadow digging and digging,
piling up sludge with a hand shovel
beside the only tree.
Two o’clock I come by
and he’s slumbering in the grass beside rat holes.
Three and he’s stretched across a jagged stonewall,
folded hands tucked beneath one ear–
a beautiful young boy smiling,
not the heavy, large shadow who can’t breathe.
Four-thirty and the August heat
takes one down here.
He’s pulled up an elbow joint
some three feet round.
At seven I head home for the night,
pass the fresh gravel mound,
a soft footprint near the manhole
like the “x” abuelo would place beside his name
all the years he couldn’t write.