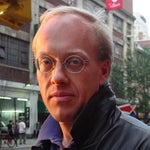 Chris Hedges was the former Middle East bureau chief for The New York Times, where he was a foreign correspondent for almost 20 years. While there, he was a member of the team awarded the 2002 Pulitzer Prize for coverage of global terrorism. A graduate of Harvard Divinity School, Hedges is currently a senior fellow at The Nation Institute and has previously worked for National Public Radio and The Christian Science Monitor, among other news outlets. In 2002, in addition to receiving the Amnesty International Global Award for Human Rights in Journalism, Hedges published War Is a Force That Gives Us Meaning, which was a finalist for the National Book Critics Circle Award for Nonfiction. His most recent title, Days of Destruction, Days of Revolt, was written in collaboration with cartoonist Joe Sacco and was a bestseller.

From City of Ruins

Camden is where those discarded as human refuse are dumped, along with the physical refuse of postindustrial America. A sprawling sewage treatment plant on forty acres of riverfront land processes 58 million gallons of wastewater a day for Camden County. The stench of sewage lingers in the streets. There is a huge trash-burning plant that releases noxious clouds, a prison, a massive cement plant and mountains of scrap metal feeding into a giant shredder. The city is scarred with several thousand decaying abandoned row houses; the skeletal remains of windowless brick factories and gutted gas stations; overgrown vacant lots filled with garbage and old tires; neglected, weed-filled cemeteries; and boarded-up store fronts.

Continue reading “City of Ruins” at The Nation

America from the Outside: How the World Sees US | April 3, 2013
Days of Destruction, Days of Revolt