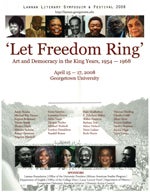 By sweeping away legal segregation in the public sphere, and especially by securing the right to participate in the democratic franchise for people of color, the Civil Rights Movement fundamentally changed American life. This struggle for social justice has been well documented and justly honored.

Less well-documented is how the arts helped sustain the Movement and were essential to its successes. On the fortieth anniversary of the death of Dr. Martin Luther King, the Lannan Literary Symposium sought to acknowledge this legacy while paying special attention to the contributions of poets, writers, and artists to the public discourse of the Movement, especially during the period Taylor Branch has called “the King Years,” 1954-1968.

Welcome and Plenary Lecture: “‘Woke Up This Morning’: the Creativity of the Freedom Songs.”
5:00 PM – 6:00 PM
Vincent Harding explores the artistry of the songs used to inspire and to sustain participants in the Civil Rights Movement while also serving to narrate the Movement’s goals.

SYMPOSIUM I: Art and Democracy in the King Years and Beyond: Scholarly Assessments
9:30 AM – 11:45 AM
Scholars assess the artistic production of the years of the Civil Rights Movement. What is the role of the arts in times of social and political upheaval? Joanne Gabbin, Aldon Nielson, Sandra Shannon, Valerie Smith, Eleanor Traylor, Ekwueme Michael Thelwell, and Jabari Asim (moderator).

2008 Lacay Plenary Lecture: “Art as a Form of Politics”
3:45 PM – 5:00 PM
Amiri Baraka considers the ways in which artists are political, and how politics is used in art.

Luncheon and Plenary Lecture: “Music of Struggle”
12:15 PM – 1:45 PM
Ruth Harris reflects on the activism of community-building through song.

April 14, 2008 | Welcome and Plenary Lecture: “‘Woke Up This Morning’: the Creativity of the Freedom Songs”

April 16, 2008 | SYMPOSIUM I: Art and Democracy in the King Years and Beyond: Scholarly Assessments

April 16, 2008 | SYMPOSIUM II: Creativity, Resistance, Liberation: Forms of Political Engagement in the Arts of the 1960s

April 17, 2008 | SYMPOSIUM IV: Advancing American Ideals: Democracy as a Goal for the Arts