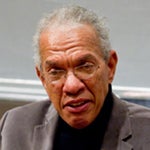 Ivanhoe Donaldson was an active member of the SNCC and is now a businessman and political consultant. Donaldson worked for SNCC as an organizer and held leadership positions within the organization. In 1960-62, as a SNCC field secretary, Donaldson collected food in Michigan and Kentucky and brought it to Mississippi to help sharecroppers and tenant farmers who had been kicked off of their land for attempting to register to vote. In 1963 he was active in demonstrations in Danville, Virginia, and later during “Freedom Summer” in Mississippi in 1964. After the Southern Christian Leadership Conference (SCLC) began planning a march from Selma, Alabama, to Montgomery, Alabama, in 1965, Donaldson became one of the SNCC organizers in Selma. In 1968, Donaldson helped found Afro-American Resources, Inc., which ran the Drum and Spear Bookstore, Drum and Spear Press, and the Center for Black Education in Washington, D.C. He was also a visiting lecturer for Afro-American courses at the University of Massachusetts at Amherst in 1970. Donaldson advised and worked for Washington, D.C. mayor Marion Barry for many years. Donaldson is currently a vice-president for labor force management company PRWT Services. He continues to support SNCC related activities and served on the advisory committee for an October 2005 conference called “Tell the Story: The Chicago SNCC History Project, 1960 -1965.”