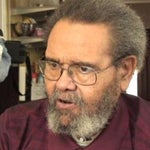 Lawrence Guyot was born in Pass Christian, Mississippi. Guyot earned his B.S. degree in Biology and Philosophy from Tugaloo College and his law degree from Rutgers University. While at Tugaloo, he became active in civil rights and was one of the original members of the SNCC. In 1964, Guyot directed the Freedom Summer Project in Hattiesburg, Mississippi. That same year, he was elected chairman of the Mississippi Freedom Democratic Party, a post he held when the MFDP challenged the state party’s refusal to allow African Americans in its delegation to the Democratic National Convention in Atlantic City in 1964. The challenge led Mississippi party officials to integrate and to include women in its delegation. In 1966, Guyot ran for Congress as an anti-war candidate. A resident of Washington, D.C. since 1971, Guyot has remained active in local politics and civil rights issues. He is an Advisory Neighborhood Commissioner for LeDroit Park and conducts leadership trainings for a number of organizations including Operation Understanding, the University of Mississippi, Georgetown University, and Americorps. He makes frequent appearances on national and local news programs and has been featured in several documentaries, including “Eyes on the Prize,” PBS’s acclaimed documentary series on the Civil Rights Movement, as well as “Making Sense of the Sixties,” “The War on Poverty,” and “Tales of the FBI.” Guyot passed away in Mount Rainier, MD, in November 2012.