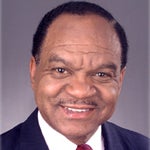 Walter E. Fauntroy was born in Washington, D.C. After attending Yale University Divinity School he became the pastor of the New Bethel Baptist Church in Washington. In 1961, Dr. Martin Luther King, Jr. appointed Fauntroy director of the Washington Bureau of the Southern Christian Leadership Conference and he served as Dr. King’s personal representative to presidents Kennedy and Johnson. In 1966 President Johnson appointed Fauntroy vice chairman of the White House’s “To Fulfill These Rights” conference. He has also served as vice chairman of the Council of the District of Columbia and national coordinator of the Poor People’s Campaign. Fauntroy was elected to the House of Representatives in 1971, making him the first delegate to serve the District of Columbia in 100 years, and served until he retired from Congress in 1990. Fauntroy was a founding member of the Congressional Black Caucus, which he chaired in 1981, and author of the “Black Leadership Family Plan For the Unity, Survival and Progress of Black People” (1982). On Thanksgiving Eve in 1984 he, with Randall Robinson and Dr. Mary Francis Berry, launched the Free South Africa Movement with their arrest at the South African Embassy in Washington, D.C. Fauntroy is president of the National Black Leadership Roundtable, the national network vehicle of the Congressional Black Caucus that he founded in 1977. In that capacity, he is co-chair of the Sudan Campaign and chairman of the Business Enterprise Development, LLC. He is married, has two children, and lives in Washington, D.C.