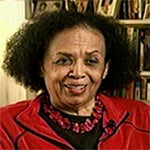 Dorie Ladner is a civil rights activist born and raised in Hattiesburg, Mississippi. She first became involved with the Civil Rights Movement when she and her sister and fellow activist, Joyce Ladner, joined the Hattiesburg NAACP Youth Council in 1958. Mentored by civil rights leaders Vernon Dahmer and Clyde Kennard, Ladner went on to work as a field secretary for the SNCC, recruiting, organizing, and canvassing votes in towns in the Mississippi Delta. Before graduating from Tougaloo College, Ladner dropped out of school three times to work full-time for the SNCC, working in various capacities. She spent time fundraising from the New York SNCC office, and as a project director in Natchez, Mississippi. She and Joyce Ladner also worked for a time in Jackson, Mississippi, where they lived in the legendary Freedom House with other activists, including Bob Moses and Lawrence Guyot. She marched with the Rev. Martin Luther King Jr. from Selma to Montgomery and at the March on Washington in 1963. Ladner remained in the SNCC until 1966 when she moved to St. Louis where she worked for an anti-poverty program and continued her activism with the Congress of Racial Equality (CORE). Ladner moved to Washington, D.C. in 1974 to pursue a graduate degree at Howard University’s School of Social Work. Until her recent retirement, Ladner worked as a social worker in the emergency room of D.C. General Hospital. She has continued her activist work as an advocate for voter rights and affirmative action. She lives in Washington, D.C.