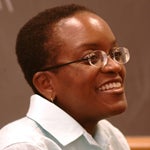 Valerie Smith was raised in Brooklyn, New York, and educated at Bates College and the University of Virginia. Smith has taught at the University of California, Los Angeles, and is currently Woodrow Wilson Professor of Literature in the Department of English at Princeton University. She is also the director of Princeton’s Center for African American Studies. She is a specialist in African American literature and culture, with specific interests in black feminist theory and film studies. Her publications include Not Just Race, Not Just Gender: Black Feminist Readings (1998) and Self-Discovery and Authority in Afro-American Narrative (1987). She has also edited Representing Blackness: Issues in Film and Video (1997), New Essays on Song of Solomon (1994), and African American Writers (1991). She co-edited a special issue of Black American Literature Forum (now African American Review) on black film with Camille Billops and Ada Gay Griffin, and a special issue of Signs with Marianne Hirsch on gender and cultural memory. She has held fellowships from the Bunting Institute, the National Endowment for the Humanities, and the University of California Humanities Research Institute. She received a Guggenheim Fellowship in 2005-06 and an Alphonse G. Fletcher, Sr. Fellowship in 2006-07. At present, she is completing a book on the Civil Rights Movement in cultural memory.

Let Freedom Ring | April 16, 2008
SYMPOSIUM I | Art and Democracy in the King Years and Beyond: Scholarly Assessments