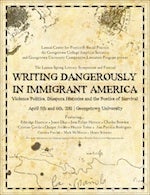 The 2011 Lannan Literary Symposium welcomed a diverse group of influential and engaged writers, journalists, activists and artists, all of whom have engaged in projects committed to exploring, critiquing, remembering, re-imagining and changing the legacies of state-sponsored violence in the Americas; especially in relation to increasingly mobile and displaced communities that, whether migrant, immigrant, exiled, or diasporic, continue to be both vulnerable to, and resilient against the demands and the effects of such violence. The themes across the symposium’s sessions will focus primarily on the vexed relationships between the U.S., its emerging immigrant-diasporic communities, and the specific American regions they mostly represent: the Caribbean, Central America, and the U.S./Mexico borderlands.

Writing Beyond Catastrophe: Haiti, the Earthquake and the Diaspora
10:00 AM – 11:45 AM | Copley Formal Lounge
Memoirist and novelist Edwidge Danticat discusses Haiti, the January 2010 earthquake and Haitian diaspora communities in the U.S.

April 6, 2011 | Writing Beyond Catastrophe: Haiti, the Earthquake and the Diaspora