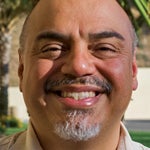 Héctor Tobar is a Los Angeles born author and journalist. He is the son of Guatemalan immigrants, and began his writing career as the editor of the bilingual community newspaper El Tecolote in San Francisco’s Mission District. Later, he joined the staff of Los Angeles Times, where he’s worked as a city reporter and national and foreign correspondent. He was a member of the Times reporting team that won a Pulitzer Prize for coverage of the 1992 Los Angeles riots.

He is the author of three books, including the forthcoming novel The Barbarian Nurseries, to be published in September 2011 by Farrar, Straus and Giroux, and to be translated into French, German and other languages. He is also the author of the novel The Tattooed Soldier, and the non-fiction Translation Nation: Defining a New American Identity in the Spanish-speaking United States. He’s also written for The Nation, The New Yorker, and for the anthologies L.A. Noi and My California. He’s studied at the Universidad Nacional Autónoma de México, and at the University of California, Santa Cruz, and he earned a Master in Fine Arts in Creative Writing from the University of California, Irvine. As a foreign correspondent for The Times, he covered the Iraq War, the economic collapse in Argentina, a revolution in Bolivia, and historic elections in Brazil and Mexico. These days, he writes a weekly column for The Times.