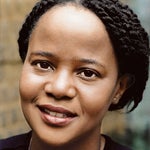 “I tend to define myself in terms of the women I knew growing up and the stories they told me.”

Edwidge Danticat was born in Haiti in 1969, and was raised by her aunt under the dictatorial Duvalier regime (her parents left for the US when she was four). Danticat was reunited with her parents and brothers in America when she was 12. She published her first writings two years later, and holds a degree in literature from Barnard College and an MFA from Brown University.

Her work has appeared in The New Yorker and many anthologies. She is the co-author, with filmmaker Jonathan Demme, of two books on Haitian art: Islands on Fire and Odillon Pierre: Haitian Artist (Kaliko Press). She was associate producer, with Jonathan Demme, on a documentary about Haiti called The Agronomist. She is the author of Brother, I’m Dying (Alfred A. Knopf, 2007), which is a non-fiction account of the deaths of her father and her uncle. It is currently in its 6th hardback printing and was nominated for a National Book Award (making her one of the few writers to have been nominated for both fiction and non-fiction). Her latest book is Create Dangerously: The Immigrant Artist at Work (Princeton University Press, 2010). She was the recipient of a MacArthur Foundation ‘Genius’ Grant in 2009.

Writing Dangerously in Immigrant America | April 5, 2011
Writing Beyond Catastrophe: Haiti, the Earthquake and the Diaspora

Listen to the Reading