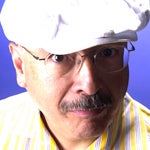 Juan Felipe Herrera is the son of migrant farm workers, Lucha Quitnana from El Paso, Texas, and Felipe Emilio Herrera from El Mulato, Chihuahua. During the early fifties, he was raised in the small towns, ranches and worker fields of the San Joaquín Valley. By the time Elvis became famous, his family settled in Logan Heights Barrio, San Diego and then in San Franscisco’s Mission District. After graduating from San Diego High in 1967 Juan Felipe became part of the first wave of Chicanos to receive an EOP scholarship to attend UCLA. There he became an activist, teatrista (founding community performance ensembles, Teatro Chichimeca and Teatro Tolteca) and a poet interested in experimental poetry and theatre and indigenous cultures.

These concerns inspired him to lead the first formal Chicano trek to Mexican Indian endangered cultures, in particular the Lacandón rain forest villages of Chiapas, the Totonaca villages of northern Veracruz and the Huichol communities in the mountains of Nayarit. This journey changed his life as a human being and as an artist. He has exhibited the photography and video of this journey ever since and has written on the subject in various genres.

A graduate of Stanford University and the Iowa Writer’s Workshop, Juan Felipe has published 24 volumes of poetry, prose, theatre, children’s books, and young adult novels — winner of over fifty awards, fellowships and honorable mentions. Some of his work has been put to musicals in New York and opera in Houston, Texas. His most recent publications Cinnamon Girl: Letters Found Inside a Cereal Box (Harper Collins – Joanna Colter Books) and Downtown Boys (Scholastic Press) won major national awards. New work include 187 Reasons Mexicanos Can’t Cross the Border: Undocuments 1971-2007 (City Lights, SF, Fall ’07) and Half of the World in Light: New and Selected Poems (University of Arizona Press, Tuscon, Spring ’08). His recent play musical for children and young adults, Salalandia, debuted at the La Jolla Playhouse at the end of January 2008.

Currently Juan Felipe’s interests are writing plays for children and young adults, poetry operas, poetry and dance theatre and painting. At the University of California — Riverside, Juan Felipe holds the Tómas Rivera Endowed Chair in Creative Writing where he is a professor in the department of Creative Writing.

[Let Us Gather in a Flourishing Way]