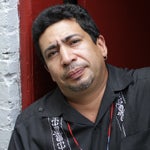 Quique Avilés is a DC poet, performer, and community activist whose work is dedicated to addressing social issues. For 30 years, Quique has been challenging audiences with his provocative, painful, humorous, poignant, and powerful work. Originally from El Salvador, Quique graduated from the Duke Ellington School of the Arts in 1985 and founded the LatiNegro Theater Collective, an ensemble of African American and Latino young artists. In 1999, he co-founded Sol & Soul, an arts and activist organization, and served as its Artistic Director until 2005. He has written and performed in 10 major one-man shows dealing with issues of race and identity, including Latihood, Chaos Standing, Caminata: A Walk though Immigrant America, and The Children of Latinia. His most recent work is Los Treinta, a one-man show that explores and celebrates to the 30-year presence of Salvadorans in the nation’s capitol.

His poetry and commentary have been featured on NPR’s Latino USA and This I Believe, on local radio (WAMU and WPFW), and published in local journals and several anthologies. In 2004, Quique published his first book of poetry, The Immigrant Museum, an artbook designed in collaboration with Raices de Papel and printed in Mexico City. He has performed at theaters and community centers in Washington DC, Los Angeles, Minneapolis, New York, San Francisco, and Santa Fe; at colleges and universities in over 10 states; and at theater festivals in Havana, Mexico City, and San Salvador.

My tongue is divided into two

My tongue is divided into two
by virtue, coincidence or heaven
words jumping out of my mouth
stepping on each other
enjoying being a voice for the message
expecting conclusions

My tongue is divided into two
into heavy accent bits of confusion
into miracles and accidents
saying things that hurt the heart
drowning in a language that lives, jumps, translates