Living in a Precarious World 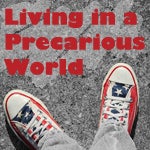 The “fear of falling” that Barbara Ehrenreich diagnosed among the middle class 25 years ago has now become ordinary lived experience, and precarity has become the new norm. Poverty continues to increase, even as the unemployment rate slowly falls. This reflects a broader set of economic changes as secure employment disappears and many find only low-wage, temporary, contingent jobs. Young people are encouraged to go to college, but recent graduates too often find themselves unemployed or, at best, underemployed, while other spend years in prison, caught in the tide of mass incarceration, only to find themselves practically barred from employment and housing upon release. Older workers struggle to find new jobs after being displaced, and tens of thousands who were laid off during the “Great Recession” have still not found work. Meanwhile, income inequality in the United States continues to grow.

In response to the rise of precarity, artists, journalists, activists, and academics have debated the larger stakes and implications of this new “precariat.” How does the struggle to get by shape our lives, our relationships, and our social institutions? How do we challenge the rise of precarity, and what, if anything, does it offer as the basis for resistance? “Living in a Precarious World” will explore these questions through commentary, fiction, poetry, and interactive performance.

All events are free and open to the public.

Tuesday, April 1 | Copley Formal Lounge | 10:30 AM
Hannah Woodroofe, John Russo, and Virginia Leavell draw on their experience and research to explore what precarity means in the United States today. Introduced by Professor Pamela Fox and moderated by Professor Lori Merish.

Living in a Precarious World
7:00 PM | Copley Formal Lounge
The symposium closes with readings and performances from Jimmy Santiago Baca and Bryonn Bain.