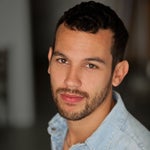 Justin Torres was born to a father of Puerto Rican descent and a mother of Italian and Irish descent. His first semi-autobiographical novel, We the Animals, was published in 2011. The book was nominated for an NAACP Image Award for outstanding literary work by a debut author, was a finalist for a Publishing Triangle Award, and won an Adult Debut Honor Award in the Indies Choice Book Awards.

From Reverting to a Wild State

I spotted a golden feather on the edge of the concrete platform, waiting for me, while I was waiting for the train. I thought of a joke, about rats devouring an entire golden pigeon—but there was no one around to share the joke with. A bum slept expertly on a too small bench, a woman pulled herself inward and stood far away, watching her toes, and a very young man gave me a very rough look. I picked up the feather, which was on a thin gold chain, but I stayed squatted, close to the edge, leaning my head into the danger zone. I could see all the way to the next station, where the train idled, its headlights like tiger eyes in the tunnel-jungle. I waited there, poised, fascinated, as the train approached and the eyes widened. When I finally stood, the woman and the young man were staring baldly. We were all connected, all relieved that I had not jumped. I dangled my feather for them on its chain, as if to explain myself—all of this in just a blink of a moment—then the train roared its arrival, doors opened, and we stepped into separate cars. It was late, past midnight, and I was headed uptown to clean for a man.

Continue reading “Reverting to a Wild State” at The New Yorker.