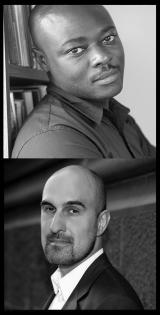 From Oil on Water

1.
I am walking down a well-lit path, with incidents neatly labeled and dated, but when I reach halfway memory lets go of my hand, and a fog rises and covers the faces and places, and I am left clawing about in the dark, lost, and I have to make up the obscured moments as I go along, make up the faces and places, even the emotions. Sometimes, to keep on course, I have to return to more recognizable landmarks, and then, with this safety net under me, I can leap onto less certain terrain.

So, yes, there was an accident, a fire. An explosion in the barn with the oil drums. The fire flew on the wind from house to house, and in a few minutes half the town was ablaze. Many people died, including John’s father. They say he died trying to save my sister, Boma, and if it wasn’t for him, she’d have died. My father was imprisoned. He doesn’t smoke anymore since that day. My mother returned to her parents’ village, where she still lives. And as my sister burned, and my family disintegrated, I was in Lagos listening to lectures, eating dinner in Chinese restaurants, and I didn’t hear about the tragedy till I returned home with my journalism certificate.

No, it was not a pipeline accident, as I told the white man, as I wrote in my published piece. But it might easily have been one, as in countless other villages. My father is still in prison, Boma and I still go to visit him, and each time he sees her face he turns away and his hands shake, and recently she has stopped going. My mother comes from the village once every month to see him. Occasionally I go with her, and I watch them look at each other, and sometimes they have a lot to talk about, and sometimes they just stare at each other in silence. The last time I went with her was over a month ago. I sit away from them, but I can hear what they are saying: She tells him about her life in the village, the farm, how the harvest this year has been good. He listens, nodding his head, and all the time he stares at her, trying to catch her eye, but she avoids his eyes as she speaks. And she calls to me, Rufus, come here. Why do you stand so far away by the window? The guard pretends to be reading his paper but he watches us all the time. I remember that the room smelled of the roasted peanuts my mother brought for my father. I remember that the guard had a bald spot. My mother looked thinner, darker.
The fog lifts as suddenly as it descended, and the sun shines brightly again, and once more I am on sure ground, but I know the fog can return again, get into memory’s eyes, blinding it momentarily.

That summer I would ride my bike over the bridge, lock it up in front of one of the bars on Orchard Street and drift through the city on foot, recording. People and places. Sidewalk smokers, lover’s quarrels, drug deals. I wanted to store the world and play it back just as I’d found it, without change or addition. I collected audio of thunderstorms, music coming out of cars, the subway trains rumbling underfoot; it was all reality, a quality I had lately begun to crave, as if I were deficient in some necessary vitamin or mineral. I had a binaural setup, two little mics in my ears that looked like headphones, a portable recorder clipped to my belt under my shirt. It was discreet. No one ever noticed. I could roam where I liked and then ride home and listen back through Carter’s thousand-­dollar headphones at the studio. There were always phenomena I hadn’t registered, pockets of sound I’d moved through without knowing.

Every sound wave has a physiological effect, every vibration. I once heard a field recording of a woman singing, sitting on a porch. You could hear her foot tapping, keeping time. You could hear the creak of her rocking chair, the crickets in the trees. You could tell it was evening because of the crickets. I felt I was slipping, that if I wasn’t careful I’d lose my grip on the present and find myself back there, seventy or eighty years in the past. The rough board floor, the overhang of the roof, her voice traveling through the moist heavy air to the diaphragm of the microphone, its sound converted into electrical energy, frozen, then the whole process reversed, electricity moving a speaker cone, sound spilling into my ears and connecting me to that long-­ago time and place. I could feel it flow, that voice, inhabiting the cavities of my body, displacing the present like water filling a cistern.