Born in London, Hari Kunzru is the author of the novel 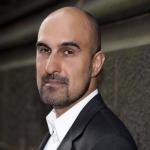 White Tears (Knopf, 2017). He is also the author of The Impressionist, Transmission, My Revolutions, and Gods Without Men, as well as a short story collection, Noise, and a novella, Memory Palace. Kunzru was a 2008 Cullman Fellow at the New York Public Library, a 2014 Guggenheim Fellow, and a 2016 Fellow of the American Academy in Berlin. He lives in New York City.

From Gods Without Men

In the time when the animals were men

In the time when the animals were men, Coyote was living in a certain place. “Haikya! I have gotten so tired of living here-­aikya. I am going to go out into the desert and cook.” With this, Coyote took an RV and drove into the desert to set up a lab. He took along ten loaves of Wonder bread and fifty packets of ramen noodles. He took whiskey and enough pot to keep him going. He searched for a long time and found a good place. “Here, I will set up-­aikya! There is so much room! There is no one to bother me here!”

Coyote set to work. “Oh,” he said, “haikya! I have so many tablets of pseudoephedrine! It took me so long to get! I have been driving around to those pharmacies for so long-­aikya!” He crushed the pseudo until it was a fine powder. He filled a beaker with wood spirit and swirled around the powder. He poured the mixture through filter papers to get rid of the filler. Then he set it on the warmer to evaporate. But Coyote forgot to check his thermometer and the temperature rose. It got hotter and hotter. “Haikya!” he said. “I need a cigarette-­aikya! I’ve done such a lot of hard work-­aikya!”

He lit a cigarette. There was an explosion. He died.

Cottontail Rabbit came past and touched him on the head with his staff. Coyote sat up and rubbed his eyes. “Honored Coyote!” said Cottontail Rabbit. “Close the door of the RV. Keep it closed. Do your smoking outside.”

Coyote began to whine. “Ouch-­aikya! Where are my hands-­aikya? My hands have blown off.” He whined and lay down and was sad for a long time. Then Coyote got up and made himself hands out of a cholla cactus.

He ground the pseudo. He mixed it with the solvent. He filtered and evaporated and filtered and evaporated, until he was sure all the filler was gone. Then he sat down and began scraping matchboxes to collect red phosphorus. He mixed the pseudo with his matchbox scrapings and iodine and plenty of water. Suddenly the flask began to boil. Gas started to fill the air. It got in his eyes, his fur. He howled and scratched at his face.

He choked on the poison gas and died.