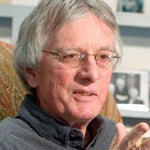 Born in Pickwick Dam, TN in 1935, Charles Wright began reading and writing poetry in the late ‘50s while stationed with the U.S. Army in Verona, Italy. Since publishing his first collection, The Grave of the Right Hand, in 1970, Wright has written numerous texts, including three trilogies of poetry and two books of criticism. He has received a National Book Award, the Griffin International Poetry Prize, the Pulitzer Prize and a Ruth Lilly Poetry Prize, and is considered one of the best American poets of his generation.

I seem to have come to the end of something, but don’t know what,
Full moon blood orange just over the top of the redbud tree.
Maundy Thursday tomorrow,
then Good Friday, then Easter in full drag,
Dogwood blossoms like little crosses
All down the street,
lilies and jonquils bowing their mitred heads.
Perhaps it’s a sentimentality about such fey things,
But I don’t think so. One knows
There is no end to the other world,
no matter where it is.
In the event, a reliquary evening for sure,
The bones in their tiny boxes, rosettes under glass.
Or maybe it’s just the way the snow fell
a couple of days ago,
So white on the white snowdrops.
As our fathers were bold to tell us,
it’s either eat or be eaten.
Spring in its starched bib,
Winter’s cutlery in its hands. Cold grace. Slice and fork.