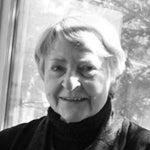 Born in Germany in 1935; poet, translator, and editor Rosmarie Waldrop studied literature and musicology at the University of Würzburg and the University of Freiburg before immigrating to the United States in the late 1950s. She received a PhD from the University of Michigan in 1966. While at the University of Michigan, Waldrop married poet and translator Keith Waldrop. In 1961 the Waldrop’s began Burning Deck Magazine, which later evolved into Burning Deck Press. In 1993 she was awarded the Harold Morton Landon Translation Award for her translation of Jabès’s The Book of Margins, and was named “Chevalier des Arts et des Lettres” by the French government. She has lived in Providence, Rhode Island since 1968 and she has taught at Wesleyan University, Tufts, and Brown.

Waldrop has authored over twenty books of her own writing, including poetry, fiction, and essays. In 2006 she was elected to the American Academy of Arts and Sciences. Her other awards include fellowships from the National Endowment for the Arts, the Fund for Poetry, and a Wila Wallace-Reader’s Digest Writers’ Award, among others.

THE EQUATION MUST BE BEAUTIFUL

Allow the first look its density. Before what words make of it. Or often, gusts of wind. Light compact in comparison. With what? Inert reason? But I admit that everything is interrelated. On the model of language. The lovers on the park bench, the bakery, the shadows playing on the wall. Breath quenched in multiple directions.