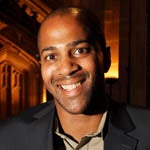 Olufemi Terry is the winner of the 2010 Caine Prize for African Writing for his short story “Stickfighting Days,” which first appeared in Chimurenga, vol 12/13, Cape Town.

Olufemi was born in Sierra Leone of African and Antillean parentage. He grew up in Nigeria, the U.K., and Cote d’Ivoire before attending university in New York. Subsequently, Olufemi lived in Kenya and worked as a journalist and analyst in Somalia and Uganda. He lives in Cape Town where he is writing his first novel. His writing has appeared in Chimurenga, New Contrast and the Caine Prize for African Writing’s Eighth Annual Collection.

Thwack, thwack, the two of them go at it like madmen, but the boys around them barely stir with excitement. They both use one stick and we find this swordy kind of stickfighting a bit crappy. Much better two on one or two on two — lots more skill involved and more likelihood of blood.

I turn to Lapy. “Let’s go off and practise somewhere. This is weak.” Lapy likes any stickfighting, but almost always does what I say. His eyes linger ruefully on Paps and the other boy — don’t know his name but I see him a lot — and then he follows me.

I run almost full tilt into Markham and he gives me a grin, like we’re best pals and he’s been looking for me. Markham is my rival. We’ve beaten each other roughly the same number of times. Well, six to five in his favour, but one of my victories was a beauty, a flowing sequence of sticks that even I couldn’t follow before I smashed his nose nicely. Almost broke it. The satisfaction of Markham’s watery-eyed submission that day makes me smile easily back at him.

“Wanna mix it up?” Markham’s eyes aren’t smiling anymore; he won the last one and thinks he’s on a roll. I know better…

–
Continue reading at The Chimurenga Chronic