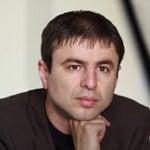 Nikola Madzirov, poet, essayist and translator, was born in 1973 to a family of Balkan Wars refugees in Macedonia. His book Relocated Stone won numerous European awards, including Macedonia’s most prestigious poetry prize. In 2008, jazz composer Oliver Lake set his work to music and performed the piece at the Jazz Poetry Concert in Pittsburgh. Madzirov is the recipient of a fellowship from the International Writer’s Workshop at Iowa. Boa Editions will publish his first collection of poetry translated into English, Remnants of Another Age, in early 2011.

She swallowed the key

“This one” we said
simultaneously when
our finger tips
were touching
in the keyhole.