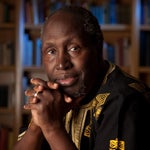 Born in 1938, Ngũgĩ wa Thiong’o, early work was written in English under the name of James Ngugi. Novels such as The River Between (1965), A Grain of Wheat (1967), and Petals of Blood (1977) established his reputation as the foremost writer in post-Independence Kenya. In the 1970s, he abandoned English for Gikuyu and Swahili, writing his critical apologia on this subject in Decolonising the Mind: The Politics of Language in African Literature (1986). Other Anglophone works of literary and cultural criticism include the trans-Atlantic Homecoming: Essays on African and Caribbean Literature, Culture, and Politics (1972), Barrel of a Pen: Resistance to Repression in Neo-Colonial Kenya (1983), and Moving the Center: The Struggle for Cultural Freedom (1993). Subsequent of the performance of his play, Ngaahika Ndeenda (I Will Marry When I Want), he was imprisoned without charge by the Kenyan authorities in a maximum security prison at the end of 1977. The period of his incarceration produced two notable works: the Gikuyu novel Caitaani Mutharabaini, published in translation as Devil on the Cross (1987), and his memoirs, Detained: A Writer’s Prison Diary (1981). The novel Murogi wa Kagogo was recently published in English as Wizard of the Crow (2006), from a translation by the author. Having lived and taught for many years in the United States at universities such as Yale and NYU, Ngugi is currently Director of the Center for Writing and Translation, and Distinguished Professor of English and Comparative Literature, at the University of California, Irvine.

From In The House Of The Interpreter

A Tale of Home and School

It’s the end of my first term at boarding school, and I’m going home. It’s April. When I first left Limuru for Alliance High School in January, it was in the last car of a goods train into which I had been smuggled, my sole company then being workmen’s tools and clothes. Now I travel third class, with schoolmate Kenneth Wanjai. It’s very crowded, standing room only, and our school uniform of khaki shirts, shorts, and blue ties marks us as different from the general passengers, all black Africans, their clothes in different stages of wear and tear. Their haggard faces belie the animated voices and occasional laughter. On getting off at Limuru railway station, I linger on the platform and look around me to savor the moment of my return. The goods shed, the tea kiosk, the waiting room, and the outside toilets marked for Europeans only, Asians only, and Africans, minus the qualifying only, still stand, silent weather-beaten witnesses of time that has passed since the station first opened in 1898.

Wanjai and I part company for our different destinations, he in his father’s car, and I alone, on foot. Then it hits me: I’m going home to my mother. Soon, very soon, I’ll be with my sisters and younger brother. I have news to share with them: I was among the top of my class. No doubt my mother will ask me if that was the best I could have done, or her variation, were you number one, and I will have to confess that another boy, Henry Chasia, was ahead of me. As long as you tried your best, she will surely tell me with pride. I am going to bask in her sunny smile, which always carries warmth and depth of care. I enjoy her reaction in advance.

Continue reading In The House Of The Interpreter at NPR.