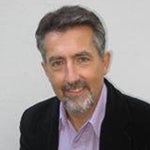 Author and filmmaker Mike Tidwell is founder and director of the Chesapeake Climate Action Network, a grassroots nonprofit organization dedicated to raising awareness about the impacts and solutions associated with global warming in Maryland, Virginia, and Washington, D.C. His most recent book, focusing on Katrina and global warming, is titled The Ravaging Tide: Strange Weather, Future Katrinas, and the Race to Save America’s Coastal Cities. His documentary film, We Are All Smith Islanders, depicts the dangers of global warming in Maryland, Virginia, and D.C. Tidwell has been featured in numerous national media outlets including NBC’s Meet the Press, NPR, The New York Times, and the Washington Post. Tidwell received the Audubon Naturalist Society’s Conservation Award in 2003. A long-time resident of Maryland, Tidwell lives in Takoma Park with his wife and son.

from Snap into Action for the Climate

record heat and wind and fire displace nearly one million Southern Californians. Record drought in Atlanta leaves the city with just a few more months of drinking water. Arctic ice shrinks by an area twice the size of Texas in one summer. And all over the world — including where you live — the local weather borders on unrecognizable. It’s way too hot, too dry, too wet, too weird wherever you go.

All of which means it’s time to face a fundamental truth: the majority of the world’s climate scientists have been totally wrong. They’ve failed us completely. Not concerning the basics of global warming. Of course the climate is changing. Of course humans are driving the process through fossil fuel combustion and deforestation. No, what the scientists have been wrong about — and I mean really, really wrong — is the speed at which it’s all occurring. Our climate system isn’t just “changing.” It’s not just “warming.” It’s snapping, violently, into a whole new regime right before our eyes. A fantastic spasm of altered weather patterns is crashing down upon our heads right now.

—
Continue reading “Snap into Action for the Climate” on Orion’s website.