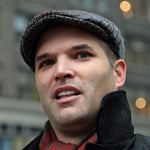 Matt Taibbi is an American author and polemical journalist reporting on politics, media, finance, and sports for Rolling Stone and Men’s Journal. Previously, he edited and wrote for The eXile, the New York Press, and The Beast. His July 2009 Rolling Stone article “The Great American Bubble Machine” famously described Goldman Sachs as “a great vampire squid wrapped around the face of humanity, relentlessly jamming its blood funnel into anything that smells like money.” He is the author of the book Griftopia: Bubble Machines, Vampire Squids, and the Long Con That Is Breaking America.

from “‘Objective Journalism’ Is an Illusion”

Jon Stewart started sixteen years ago as the host of a comedy talk show, and he walks away this week as maybe the most trusted news reporter in America. His success in stealing the thunder away from what we used to call the “straight news” business is the greatest and funniest joke he ever pulled off.

Some object to the characterization of Stewart as a journalist, because he “has opinions” and “isn’t objective,” but those people aren’t to be taken seriously. Opinion can’t be extracted from reporting. The only question is whether or not it’s hidden. Everything journalists do is a subjective editorial choice, from the size of headlines to the placement of quotes and illustrations.

Continue reading “‘Objective Journalism’ Is an Illusion” at The New York Times.