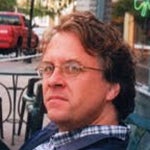 I Was Dreaming of Alleys

Leaping into
this afternoon lodges
of itself upon light, open
among the cracked
pavements, slanting winds
turning to face
music slides along the wall.
Wonder now, we’re strange
hand reaching across the fence
casual expense. What would
the art be knowing
do be doing, becalmed
or flouting the eye of storms,
I said, crossing at red lights
as if that could break
the limits of the streets.
Learning to move
in the body given
into edges of itself,
turned, that I would
be here to you loosely,
shaping the stories
of other lives all our own
never gone, though the snow stops.
The way veins streak fingers
leaves place to hold
the glass close to what we’re drinking
for. She said it’s off somehow
the aliens landed, a family visit.
I will not drift away from digression
or trap each inflection. Standing
open to the sky, leaning
towards pockets and pockmarks
saying yes, this
is where it starts,
all the shadows looking back
to be beginning again
in what happened
on the margins of fearing the footsteps.