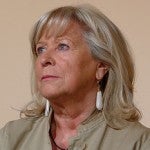 The great German film director Margarethe von Trotta has won the Venice Film Festival Award for “Best Director” for her film “Marianne and Juliane” in 1981, and has been honored by film festivals in New York, Boston, Vancouver, Rome, Paris and other capitals. She has been described by her peers and by film critics throughout the world as “one of the world’s great directors,” (James Monaco, The Encyclopedia of Film).