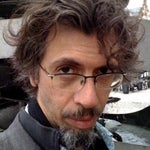 “Nuyorican” poet Edwin Torres began his career as a graphic designer in 1989 before discovering the Nuyorican Poets Café. As the New York representative, Torres performed at the 1992 National Poetry Slam in Boston. He has also performed at a variety of venues, including the Lincoln Center for the Performing Arts. Torres has published over a dozen books, with the most recent being 2014’s Ameriscopia. As a visual poet, his work has been shown at Exit Art and EFA Gallery in New York.

Pixie-dust infusion
shoots steady shock through incline—
is that crooked
or slyster meat tong, grabbing hold of night
so as not to pulse so bright past outcome

At one time, so that anything shattered
will sound pretty
I need to show how I love—sound and vision
if I sing and move to what I hear
and feel, just for you

Well, let’s see if we can match
our limbs to the credible—or maybe the possible
let’s play again, so that
you know what you’re in for,
when you save your last dance for glass