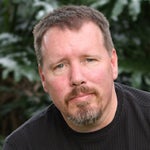 Brian Turner of Fresno, CA served for seven years in the US Army. He was deployed to Bosnia-Herzegovina in 1999-2000 with the 10th Mountain Division and was later an infantry team leader in Iraq. He received the 2005 Beatrice Hawley Award for his debut collection Here, Bullet.

What Every Soldier Should Know

To yield force to is an act of necessity, not of will;
it is at best an act of prudence.
—Jean-Jacques Rousseau

Always enter a home with your right foot;
the left is for cemeteries and unclean places.

Inshallah means Allah be willing.
Listen well when it is spoken.

You will hear the RPG coming for you.
Not so the roadside bomb.

There are bombs under the overpasses,
in trashpiles, in bricks, in cars.

There are shopping carts with clothes soaked
in foogas, a sticky gel of homemade napalm.

Parachute bombs and artillery shells
sewn into the carcasses of dead farm animals.

Graffiti sprayed onto the overpasses:
I will kell you, American.

There are men who earn eighty dollars
to attack you, five thousand to kill.

Small children who will play with you,
old men with their talk, women who offer chai—

and any one of them
may dance over your body tomorrow.