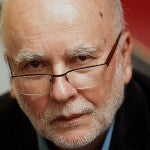 A major figure of the Polish New Wave literary movement of the early 1970s and of the anti-Communist Solidarity movement of the 1980s, Adam Zagajewski’s most recent books in English are Eternal Enemies (2008) and Without End: New and Selected Poems (2002), nominated for a National Book Critics Circle Award.

His other collections of poetry include Mysticism for Beginners (1999), Canvas (1991) and Tremor: Selected Poems (1985). His books of essays and literary sketches are Two Cities: On Exile, History and the Imagination, and Solidarity, Solitude: Essays. He divides his time between Krakow and Chicago, where he teaches at the University of Chicago.

In that café in a foreign town bearing a French writer’s
name I read Under the Volcano
but with diminishing interest. You should heal yourself,
I thought. I’d become a philistine.
Mexico was distant, and its vast stars
no longer shone for me. The day of the dead continued.
A feast of metaphors and light. Death played the lead.
Alongside a few patrons at the tables, assorted fates:
Prudence, Sorrow, Common Sense. The Consul, Yvonne.
Rain fell. I felt a little happiness. Someone entered,
someone left, someone finally discovered the perpetuum mobile.
I was in a free country. A lonely country.
Nothing happened, the heavy artillery lay still.
The music was indiscriminate: pop seeped
from the speakers, lazily repeating: many things will happen.
No one knew what to do, where to go, why.
I thought of you, our closeness, the scent
of your hair in early autumn.
A plane ascended from the runway
like an earnest student who believes
the ancient masters’ sayings.
Soviet cosmonauts insisted that they didn’t find
God in space, but did they look?