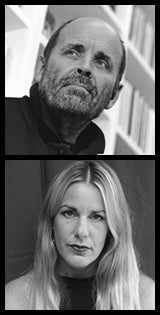 Self-Portrait with Flames and Arapaho Bison

We should have taken better note of what crashed through the wall
what primal animal force, head ducked, what near-extinct species

which can cross any river more than a mile wide from what to whatever;
what force when drought-moulted, when smelling water,sets a thousand like it running. Stuffed, it froze as it crashed.
In the bar beneath, though we hardly knew it, we were more taken

with the smell of burning, more taken with the flames themselves
—the bus back, burning in the black of the snowfield—

which might well have been the smell of preconception in flames,
the smell of chance, like rubber, burning. The smell of discretion,

like kerosene, burning up, then tearing in the wind. The smell
of neglect, like the stuffing of seats, burning. The smell

of stagnation, like the nap-pile over the crankshaft, burning.
We fed the flames with the detritus and napkins of weddings,

a marquee’s striped canvas, doilies, whatever stuffed collapsing thing
sat upright for a while in the flames and then fell forward.

It is my conviction that night that we were burned alive,
for the briefest minutes you sat opposite, you flexed, you flailed,

you grinned so wide, you seemed like me to be fuel for flame,
all we’d been was eaten by flames which lengthened, which blued;

we stood up in flames that burned us alive but could do us no harm…
Above the bar like a train, or an engine stuffed with time, while all

those flaming Arapaho arrows skidded of its back the clumsy bison
crashed through the wall, we stepped away from the flames, the past.

—
From The World Before Snow (Carcanet, 2015)
Read more about Tim Liardet

Conspiracy to Commit Larceny: A Recipe

Take the man you think you love and his
fabulous lips. Take him from one place
to the next. Let him drive your car. Let him
drive it through the mood-crazed woods
until it overheats. Let the nights feed
from your eyes as you look at him. Do
not turn on the heat. Do not spill
the flavored oils of the heart. Do not
eat from the palm of your hand
a fluid ounce of what you may need.
Do something illegal. You only have to be
there when they bring the contraband in.
You only have to leave yourself behind.
The stars know. The police will prowl
your neighborhood until the plate number
matches and the car checks out.
When they bring you in, you
must remove your shoes and belt.
You must pretend there was no felony.
Then you must confess. Add your past,
a pinch of the rage you feel, and how
you sit until your father bursts in
and asks whether you have been arrested.
Add a mother who tells you she is
ashamed. An expensive lawyer. The way
you remember the taste of his kiss and
how real he was and how he would
drive dark roads at high speeds through
the back woods with the headlights off.
Remember what the stars see. And how
once it is over the lawyer will send
a letter saying he said you knew nothing,
saying he tried to keep you out of it,
though the police said he had given
you up as they made you say his name.