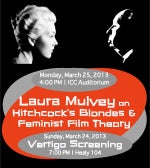 “Hitchcock’s Blondes and Feminist Film Theory: A Cinema of Voyeurism or a Cinema of Self-Reflexivity?” emerges from Prof. Mulvey’s ongoing interest in the director’s work and her renewed attention to the critical suppositions and methods of 1970s feminist film theory. Through close readings of Vertigo and her own 1975 essay “Visual Pleasure and Narrative Cinema,” Prof. Mulvey argues that the “Hitchcock blonde” has become an established cliché image within popular culture today, recognized, recounted and discussed beyond film theory circles. In this lecture Prof. Mulvey returns to significance of Hitchcock’s blonde heroines and his voyeuristic cinema for the development her feminist and psychoanalytic approach to film in the 1970s. Recently, after a gap of forty years, she has returned to the “Hitchcock blonde” to reflect on his cinema as, perhaps, revealing and self-reflexive rather than simply misogynistic.

from Visual Pleasure and the Narrative Cinema

The magic of the Hollywood style at its best (and of all the cinema which fell within its sphere of influence) arose, not exclusively, but in one important aspect, from its skilled and satisfying manipulation of visual pleasure. Unchallenged, mainstream film coded the erotic into the language of the dominant patriarchal order. In the highly developed Hollywood cinema it was only through these codes that the alienated subject, torn in his imaginary memory by a sense of loss, by the terror of potential lack in phantasy, came near to finding a glimpse of satisfaction: through its formal
beauty and its play on his own formative obsessions.

This article will discuss the interweaving of that erotic pleasure in film, its meaning, and in particular the central place of the image of woman. It is said that analysing pleasure, or beauty, destroys it. That is the intention of this article. The satisfaction and reinforcement of the ego that represent the high point of film history hitherto must be attacked. Not in favour of a reconstructed new pleasure, which cannot exist in the abstract, nor of intellectualised unpleasure, but to make way for a total negation of the ease and plenitude of the narrative fiction film. The alternative is the thrill that comes from leaving the past behind without rejecting it, transcending
outworn or oppressive forms, or daring to break with normal pleasurable expectations in order to conceive a new language of desire.