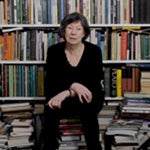 Born in Oxford, Laura Mulvey studied history at St. Hilda’s, Oxford University. In the early 1970s, she came to prominence as a film theorist, writing for periodicals such as Spare Rib and Seven Days. Much of her early critical work investigated questions of spectatorial identification and its relationship to the male gaze, and her writings, particularly the 1975 essay “Visual Pleasure and Narrative Cinema,” which was published in the British cinema journal Screen and helped establish feminist film theory as a legitimate field of study.

Between 1974 and 1982 Mulvey co-wrote and co-directed with her husband, Peter Wollen, six projects: theoretical films, dealing in the discourse of feminist theory, semiotics, psychoanalysis and leftist politics. These include Penthesilea: Queen of the Amazons (1974), Riddles of the Sphinx (1977), AMY! (1980), Frida Kahlo and Tina Modotti (1982) and The Bad Sister (1982). Upon the completion of this series, Mulvey did not return to film-making until 1991 when she began a solo project, Disgraced Moments, which took a look at the fate of Soviet revolutionary monuments after the fall of communism.

Laura Mulvey is currently a professor of film and media studies at Birbeck College, University of London.

from Visual Pleasure and Narrative Cinema

“What counts is what the heroine provokes, or rather what she represents. She is the one, or rather the love or fear she inspires in the hero, or else the concern he feels for her, who makes him act the way he does. In herself the woman has not the slightest importance.”

(A recent tendency in narrative film has been to dispense with this problem altogether; hence the development of what Molly Haskell has called the ‘buddy movie,’ in which the active homosexual eroticism of the central male figures can carry the story without distraction.) Traditionally, the woman displayed has functioned on two levels: as erotic object for the characters within the screen story, and as erotic object for the spectator within the auditorium, with a shifting tension between the looks on either side of the screen. For instance, the device of the show-girl allows the two looks to be unified technically without any apparent break in the diegesis. A woman performs within the narrative, the gaze of the spectator and that of the male characters in the film are neatly combined without breaking narrative verisimilitude. For a moment the sexual impact of the performing woman takes the film into a no-man’s-land outside its own time and space. Thus Marilyn Monroe’s first appearance in The River of No Return and Lauren Bacall’s songs in To Have or Have Not. Similarly, conventional close-ups of legs (Dietrich, for instance) or a face (Garbo) integrate into the narrative a different mode of eroticism. One part of a fragmented body destroys the Renaissance space, the illusion of depth demanded by the narrative, it gives flatness, the quality of a cut-out or icon rather than verisimilitude to the screen.