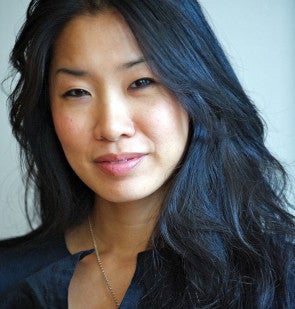 Tina Chang is the author of the poetry collections Hybrida (2019), Of Gods & Strangers (2011), and Half-Lit Houses (2004). She is co-editor of the anthology Language for a New Century: Contemporary Poetry from the Middle East, Asia and Beyond (2008). Her poems have appeared in American Poet, McSweeney’s, Ploughshares, and The New York Times and anthologized in Identity Lessons, Poetry Nation, Asian American Literature, and Asian American Poetry: The Next Generation, among others. She has received awards from the Academy of American Poets, the Barbara Deming Memorial Fund, the Ludwig Vogelstein Foundation, the New York Foundation for the Arts, Poets & Writers, and the Van Lier Foundation. Chang is the Poet Laureate of Brooklyn, the first woman named to this position, and she currently teaches poetry at Sarah Lawrence College.

From Of Gods & Strangers: “So Much Light We Could See To the Other Side”

All fuel and fire, spine left like a bent arrow, dark matter,
the teeth as relic, all of our words bitter fruit. Who could
have believed we were made like this. The cosmonaut,

the soothsayer, and the blind archeologist knew merely
by feeling with the ends of their fingers which reached out
to nothing. We were a warring lot, hammered by days,

and greedy too. Our plates were dented with heavy spoons,
words spoken in secret in front of a fire, documents burned
before anything of substance was revealed. We made that fire,

fed the flames with newspapers, kings, martyrs, and love.
We were wanton, selfish, predisposed to constant dreaming.
We fed, fought and then fought some more until night arrived

with its hellish glow. All around us, mothers taught their children
words for the first time. They fashioned the universe into something
knowable, sayable. Say this, said the mother and the infant repeated

the words, clumsily, devoted. The child’s devotion was the world
fabricating a truth. Repairs on the other side of the hemisphere.
The archeologist found our bones and said we were a strong

and healthy race, grew more ingenious than any generation before us,
before we fell away from wit, invention, our own empty embrace.
We ran to our end like leaping into a volcano. Unstoppable fury.

We should have disappeared entirely after the bomb, the floods,
our own desertion. Someone’s mouth blows dust off the bones.
The soothsayer predicts that we will come back, the cosmonaut

is willing to bet when the world ended there were more
stars filling the sky than ever before. There once was shadow,
before a last light came, not to darken the plain but to define it.