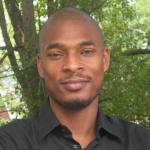 Terrance Hayes is the author of American Sonnets for My Past and Future Assassins (Penguin, 2018), a finalist for the 2018 National Book Award in Poetry; To Float In The Space Between: Drawings and Essays in Conversation with Etheridge Knight (Wave, 2018); How to Be Drawn (2015); Lighthead (2010), which won the 2010 National Book Award for poetry; Muscular Music, which won the Kate Tufts Discovery Award; Hip Logic, winner of the 2001 National Poetry Series, and Wind in a Box. An artist-in-residence at New York University, Hayes currently resides in New York City.