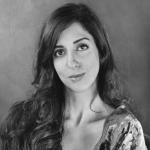 Porochista Khakpour is author of the forthcoming memoir, Sick (Harper Perennial, 2018), as well as the novels The Last Illusion, and Sons and Other Flammable Objects. Khakpour has been awarded fellowships from the Johns Hopkins University Writing Seminars, Northwestern University, the Sewanee Writers’ Conference, Virginia Center for the Creative Arts, and Yaddo, among others. Her work has been nominated for several Pushcart Prizes and has received a National Endowment for the Arts Literature Fellowship in Creative Writing. She currently teaches at the Stonecoast low-residency MFA and the Vermont College of Fine Arts full-residency MFA.

From Sons and Other Flammable Objects

While many of his hells were easy to automatically blame on Darius Adam, this one actually was his father’s fault. After all, it happened in another summer of Darius Adam’s extreme seasonal restlessnesses, when he’d spend empty hours flipping through the few old pictures they had of Iran, not just to see them, but to inspect them: the background minutiae, scraps of homeland foliage carelessly captured, blurs of background people caught in their own frozen moments unaware, a sidewalk, a storefront, the sky. He’d observe how it was different, or how it was not really different and how annoying that was. He would try to inject himself into that world and imagine himself then, and there, but this time with the awareness that it would all be lost. Only once in a while would Darius Adam allow the feelings to bubble up and take him over, make him drive to a Middle Eastern convenience store, ignore the helpful Arabs, rush for the packets of saffron and sumac and hold them hard in his hand, sniff deeply, and stumble out, like a mad-man in a nonsensical dream, feeling mildly shitheaded at the stunt but somehow satisfied by another scratch at an inconsolable itch.

It was his alone—Lala had rid herself of longing somehow, perhaps by her talent for never thinking too deeply, he thought—but he, he was stuck, and what isolated him further was the knowledge that that sickness, that deep aching lust for something as complex and impossible and maybe nonexistent as a homeland, was something his own child would never understand.

At those times the only relief would be to divorce himself from the self they knew—father, husband, teacher, whatever—and become the most abstract thing of all: an Iranian. His national identity, he would work to become that and that alone, a part of a nation, a patriot—he would work to shed any and all individuality and concentrate on what he could do to link himself with a pulseless, purely conceptual thing. He became it, high on a pole, far far away in his native wind, waving—he was red, he was white, he was green, he was the gold lion, he was the gold sun, he was the gold sword—and it was enough.