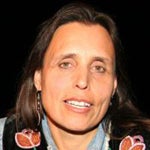 Activist and author Winona LaDuke lives and works on the White Earth reservation in northern Minnesota. She is program director of Honor the Earth, a Native-led organization that addresses primary needs of the Native environmental movement, as well as founder of the White Earth Land Recovery Project. In 2007, LaDuke was inducted into the National Women’s Hall of Fame and was nominated by Time magazine as one of America’s fifty most promising leaders under forty years of age in 1994. She has been awarded the Thomas Merton Award in 1996, Ms. Woman of the Year (with the Indigo Girls in l997), and the Reebok Human Rights Award. A graduate of Harvard and Antioch Universities, she is a former board member of Greenpeace USA, and a current advisory board member for the Trust for Public Lands Native Lands Program as well as a board member of the Christensen Fund.