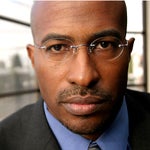 Van Jones has emerged as a leading champion of smart solutions for America’s middle class. As an advisor to the Obama White House, he helped run the inter-agency process that oversaw $80 billion in green recovery spending. A Yale Law School graduate, he has a 20-year track record as a successful, innovative and award-winning social entrepreneur. He is a co-founder of three successful nonprofit organizations: the Ella Baker Center for Human Rights, Color of Change, and Green For All. He is a globally recognized, award-winning pioneer in human rights and the clean energy economy, and a Senior Fellow at the Center for American Progress and American Progress Action Fund. He holds a joint appointment at Princeton University as a distinguished visiting fellow in both the Center for African American Studies and in the Program in Science, Technology and Environmental Policy at the Woodrow Wilson School of Public and International Affairs.

Van is on the board of several organizations and non-profits, including Demos, the Natural Resources Defense Council, the Robert F. Kennedy Center for Justice and Human Rights, and the Campaign for America’s Future. TIME magazine called him one of the 100 most influential people in the world in 2009. He is also the best-selling author of the definitive book on green jobs, The Green Collar Economy.