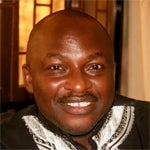 Uwem Akpan was born in Ikot Akpan Eda, in southern Nigeria. After studying philosophy and English at Crieghton and Gonzaga universities, he studied theology for three years at the Catholic University of Eastern Africa. He was ordained as a priest in 2003 and received his MFA in creative writing from the University of Michigan in 2006. Say You’re One of Them was a finalist for the Los Angeles Times Art Seidenbaum Award for First Fiction and the Dayton Literary Peace Prize. The collection was also nominated for the Guardian First Book Award, the Caine Prize for African Writing, and the Story Prize. It received the Commonwealth Writers’ Prize for Best First Book, African Region, a PEN Beyond Margins Award, and was chosen by Oprah Winfrey as a 2009 selection for Oprah’s Book Club.

Female passenger starts to scream in the molue, or you-beat-me-I-beat-you bus, in front of my battered red Volkswagen Beetle, introducing another ripple of confusion into the midmorning Lagos traffic. She jumps out. Squatting by the roadside, she tilts her head so that the blood dripping from her torn ear won’t soil her yellow onyonyo dress. Someone had reached into the bus to steal her earring, tearing her ear in the process. A group of child hawkers, whose schools are on strike, gather around her, drumming consolations into the other ear. Each time I try to move my car, there are at least two motorcycles ahead of me. The traffic stops. Up front, there’s a throng of people chanting and dancing. They carry amulets, clubs, and locally made hunting rifles. They’re members of the Oodua People’s Congress, or O.P.C. They say that Lagos belongs to the Yorubas, so all others should understand that they’re just guests. They say they will not tolerate armed robbers or corrupt police anymore in Eko City, and that this year, 1999, it is their turn to rule Nigeria. Well, this madness could have happened in Onitsha or Abuja or Ugborodo, I console myself after waiting thirty minutes for them to pass. Besides, this isn’t my first time in Lagos.

Continue reading “Baptizing the Gun” at The New Yorker.

Literacy, Literature and Democracy | April 7, 2010
Writing (and Working) Beyond Genocide:
Literary, Cultural and Social Activisms in a Changing Africa, Session I