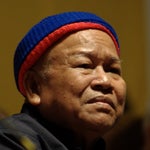 U Sam Oeur is a Cambodian poet who survived four years in concentration camps under the Pol Pot regime by feigning illiteracy and by destroying his manuscripts. He now lives in Texas where he writes and translates Walt Whitman into Khmer. His volumes include Crossing Three Wildernesses: A Memoir, and Sacred Vows.

I am swimming across a wide river
when swords start falling from the trees
They must be swords left by the Japanese
I pick up several to save as collector’s items
but the blades are rusty with deep nicks
They must have been used to butcher many Cambodians
whose tormented spirits may still inhabit the swords
I decide not to take souvenirs
And now I must cross another river
The ferry has just pulled away from the shore
Two little men run after the ferry
calling it back for me to no avail
A young boy falls in the quagmire of filth
the mud and hundreds of putrid chicken carcasses
As he sinks I rush to grasp his hair
too late. Too late. He disappears
in the foul mess as I just stand there. . .

(Translated from the Khmer by Ken McCullough.)