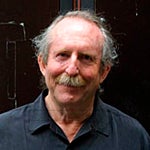 Born in South East London in 1938 and educated at University of Essex, poet and visual artist Tom Raworth has published over forty books of poetry and prose since 1966. Before beginning university, Raworth taught himself how to set type and to print, and between then and 1964 he produced three issues of a magazine, outburst, and a series of small books under the imprint of Matrix Press. In 1965, in partnership with the painter and film-maker Barry Hall, Raworth started the Goliard Press, which was later taken over by Jonathan Cape Ltd and freed Raworth up to attend the University of Essex where he transferred to the Masters programme and in 1970 was awarded an M.A. in the Theory and Practice of Literary Translation. He lives in Brighton, England, with his wife and grandson.

i would be eight people and then the difficulties vanish
only as one i contain the complications
in a warm house roofed with the rib-cage of an elephant
i pass my grey mornings re-running the reels
and the images are the same but the emphasis shifts
the actors bow gently to me and i envy them
their repeated parts, their constant presence in that world

i would be eight people each inhabiting the others’ dreams
walking through corridors of glass framed pages
telling each other the final lines of letters
picking fruit in one dream and storing it in another
only as one i contain the complications
and the images are the same, their constant presence in that world
the actors bow gently to me and envy my grey mornings

i would be eight people with the rib-cage of an elephant
picking fruit in a warm house above actors bowing
re-running the reels of my presence in this world
the difficulties vanish and the images are the same
eight people, glass corridors, page lines repeated
inhabiting grey mornings roofed with my complications
only as one walking gently storing my dream