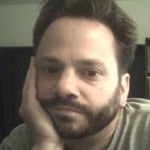 Conceptual poet, poetry scholar, and experimental musician Tom Orange has taught literature and writing at Vanderbilt, Georgetown and The George Washington Universities and now lives in Northeast Ohio, where he is active in the arts scene and local food movement. He recently released a book-length study of Clark Coolidge as a central figure between New American and Language poetries. His chapbook of conceptual prose, American Dialectics, was released in 2008. His recent and forthcoming work can be found in Aquaduck, Boog City, English Studies in Canada, The I.E. Reader, Typo, Wheelhouse, and 1913: A Journal of Forms.

TO MAKE A DADAIST POEM

Choose from this paper an article of the length you want to make your poem.

Cut out the article.

Next carefully cut out each of the words that makes up this article
and put them all in a bag.

Next take out each cutting one after the other.

Copy conscientiously in the order in which they left the bag.

The poem will resemble you.

And there you are – an infinitely original author of charming
sensibility, even though unappreciated by the vulgar herd.